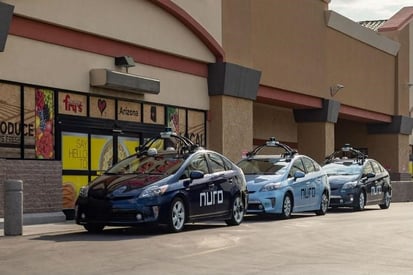 The grocery home delivery market is ultra competitive. The big grocery players like Giant, Shop Rite and Wegmans all offer home delivery via manned delivery vehicles. Kroger appears to be first in the autonomous grocery delivery service race. After successful testing last year in Scottsdale Arizona, Kroger, the nation’s largest grocer, has launched a self-driving grocery delivery service in Houston, the latest salvo in a massive grocery market that has supermarket chains investing heavily in new technology to win over online shoppers. Company officials this week showcased the first of dozens of autonomous delivery vehicles planned for Houston: Toyota Priuses outfitted with cameras, sensors and self-driving computer software. In today's competitive grocery market, companies are turning to autonomous vehicles, automation, robotics and artificial intelligence to stand out. Kroger is competing with Amazon, Walmart and other businesses to capture consumers who want fast deliveries without hassles.

Automation Is Bringing Changes to The Entire Retail E-landscape, And When It Comes to Grocery Stores, Those Changes Are Nothing Short of Inventive.

With the advent of online shopping came a revolution in convenience. Suddenly, customers didn’t have to travel to a store to browse its wares or make purchases; instead, the store would digitally come to them. In the past two decades, we’ve seen digital storefronts challenge and even overthrow brick and mortar shops in almost every consumer product category, from clothing to electronics to home-ware to media. And yet, the most essential of these categories is still sold almost entirely at physical retailers, and that’s groceries.

It’s not for lack of trying, of course. Supermarkets around the world have allowed customers to order food and household items online for years. Amazon, the world’s largest e-commerce company, set up its Fresh subsidiary specifically to bring its speedy deliveries to the grocery space. Despite these efforts, a recent study showed that only two percent of food and alcohol sales in the US are made online.

This doesn’t mean change isn’t coming to the grocery industry, however. With automation set to play an increasingly large role in our world over the coming years, change is inevitable, but it’ll be different to the changes seen across other retail categories.

The retail landscape has been in flux for the past two decades, and automation will only change it further. But with different goods presenting different buying habits and challenges for stores, the way in which automation is embedded into the purchase experience will differ between product categories. And when it comes to groceries, we’ll be seeing some very unconventional approaches.

Like automated warehouses, driver-less delivery also saves on labor costs and boosts efficiency.  But regulations, which vary by state, could make expansion of driver-less delivery difficult, while consumer sentiment remains cautious following two fatal crashes involving self-driving cars earlier this year. The number of consumers who believe highways would be safer with autonomous vehicles on the road dropped 18% over the past two years, according to the latest version of an annual survey by consulting firm Cox Automotive.

Early delivery vehicles are also slow-moving. The Nuro robot that delivers Kroger orders travels just 25 miles per hour and in early tests, consumers have reportedly expressed frustration at having to walk out to the curb to collect their groceries rather than having someone bring the order to their door.  Autonomous vehicle technology still has a long way to evolve, and experts are convinced the kinks will eventually get worked out. Professional services firm KPMG estimated driver-less delivery vehicles could log as many as 78 million miles a year by 2040. Still, early headaches raise the question of whom driver-less delivery benefits more, the retailer or the shopper?

It's easy to imagine automated online order fulfillment sweeping across the U.S. But for now at least, the technology is only feasible in very population-dense areas. We'll keep you informed of the progress of the Kroger autonomous roll-out. Meanwhile subscribe to our blog @ http://www.Land-Link.com/blog for interesting articles on technology in logistics. And, of course, if you have questions on how technology may benefit your company, we are glad to meet with you.