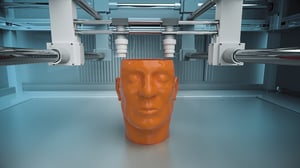 The term “additive manufacturing” references technologies that grow three-dimensional objects one superfine layer at a time. Each successive layer bonds to the preceding layer of melted or partially melted material. It is possible to use different substances for layering material, including metal powder, thermoplastics, ceramics, composites, glass and even edibles like chocolate.

Objects are digitally defined by computer-aided-design software that is used to create digital files that essentially "slice" the object into ultra-thin layers. This information guides the path of a nozzle or print head as it precisely deposits material upon the preceding layer. Or, a laser or electron beam selectively melts or partially melts in a bed of powdered material. As materials cool or are cured, they fuse together to form a three-dimensional object.

The journey from a digital file to 3D object is revolutionizing manufacturing. Gone are the intermediary steps, like the creation of molds or dies, that cost time and money.

More and more schools are incorporating 3D printing into their curriculum as tools to better prepare kids for the future. Makerspaces, equipped with printers, CNC machines, and other tools, have become common. Also, 3D printers can be found in public libraries already. Most universities have at least one 3D printer for students to use in classes or their own projects.

A big advantage of using 3D printing is its versatility and flexibility, which makes it perfect for small-scale manufacturing and prototyping.

An injection-molded prototype might cost hundreds of thousands and take weeks to make a single mold. That’s not good if you’re trying to iterate and improve on each design. Invest in a 3D printer, however, and your prototype can be sitting on your desk in hours, at a fraction of the cost.

This also makes 3D printing perfect for situations where your product may not be mass-produced. Traditional manufacturing is only effective at large volumes, but a 3D printer allows companies to produce on a case-by-case basis.

In recent years, there’s been a lot of 3D printing applications in the world of medicine, from bioprinting and surgery preparation to prosthetics. This field is still under a lot of research, so it’ll be exciting to see where it goes in the future.

Measured prosthetics can be modeled, and 3D printed at a dramatically lower price. Children who previously had to wait to get prosthetics they wouldn’t grow out of can now afford to 3D print a new one every few months. Those from third-world countries where prosthetics may not even be an option can take advantage of 3D printed ones.

An application that’s a little farther in the future is bioprinting, or 3D printing cells and tissue. The dream is that one day, we’ll be able to 3D print bones and organs for patients who need them, rather than waiting for donors.

Another exciting application of 3D printing is in construction. Concrete 3D printing has been in development for years as a fast and cheaper way to build buildings. Large-scale 3D printers specially designed to print in concrete can pour foundations and build walls onsite. They can also be used to print modular concrete sections that are later assembled onsite.

Researchers are also investigating how 3D printing could be useful in colonizing Mars. If humanity ever wants to build a colony on Mars, it would be impractical to send up construction materials from Earth. Instead, we could turn Mars rock into 3D printable material, and send up 3D printing robots to construct habitats before humans arrive. It’s a brave new world.