Congress is Considering Lowering the Commercial Driving Age to 18 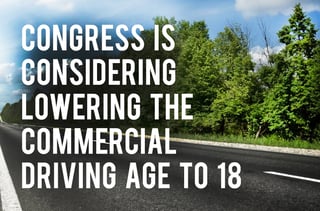 The U.S. trucking industry is pressuring Congress to allow men and women as young as 18 to drive 80,000 pound commercial trucks inter-state on U.S. highways. Federal regulations currently require that drivers be at least 21 before they can drive commercial trucks across state lines. This plan, before the Senate, and is part of highway legislation and would greatly increase the number of teenagers behind the wheel of big rigs. The pressure and importance of this issue is in response to the continuing driver shortage.

It is estimated that there could be more than 250,000 unfilled trucker jobs by 2017, but it’s no surprise that safety advocates oppose the legislation. In 2013, according to the Transportation Department’s Fatality Analysis Reporting System, drivers between the ages of 18-20 had a fatal crash involvement rate per 100,000 licensed drivers; 66 percent higher than drivers who were age 21 years or older.

Many states permit 18-year-olds to drive the big trucks, but federal law prohibits them from operating across borders. In those states, younger truck drivers are four-to six-times as likely as 21-year-olds to be involved in fatal crashes. While carriers may benefit from increased drivers to fill currently empty trucks and decreased recruiting costs, they are certainly expecting significant insurance increases and litigation expenses due to the age and lack of experience in these young drivers. Naturally, any net increase in operating costs will be figured into the carrier rates. 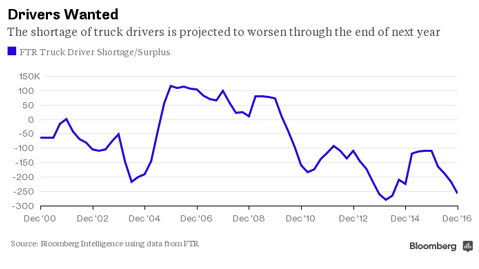 A CDL (Commercial Driver’s License) already has strict restrictions such as weight and lower DUI percentages. The Graduated Licensing Program has been in effect for personal driver’s licenses for years, and those who support this program argue that lowering the age to 18 would give people just out of high school (a demographic with a high unemployment rate) an opportunity to begin a career in an industry with demand. It may be reasonable to argue the same program could be successful in commercial transportation, but the risks that are associated with this license are much higher. Careless or inexperienced driving while behind the wheel of an 80,000 pound truck has potentially catastrophic implications.

However, states would be free to put restrictions on the younger truckers, such as limiting the types of cargo carried, or keeping to specific routes or times of day. Considering the safety advancements available today on commercial vehicles, such as collision avoidance and stability control systems, could satisfy those concerned about safety. It may only be a consideration if drivers under 21 are required to drive vehicles equipped with those safety advancements. Advanced technology on the horizon moving toward self-driving trucks will make it nearly impossible to have an impact situation with another vehicle of structure, even though a truck of that sort will still require a driver to operate the system. The truck of the near future will be more like running a computer system than driving a truck, which younger people will likely find more agreeable than the present day idea of truck driving.

To read more about what’s currently going on in transportation, click below!