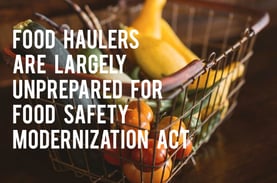 New rules governing the transportation and distribution of food began to take effect in June this year. There is profound concern among industry experts that many food haulers still are not ready to implement these new rules. During a panel discussion at the 2015 Mid-America Trucking Show in Louisville, Kentucky, lack of carrier preparedness was a major concern. Contamination incidents and outbreaks of food borne illness have a significant impact on public health.

An estimated 48 million cases of food borne illness occur every year in the United States, resulting in an estimated 128,000 hospitalizations and 3,000 deaths. Food related outbreaks and recalls are an expensive disruption in the food supply and are particularly damaging to both the companies involved and public confidence. Due to changes in the way food and feed products are produced and distributed, the increase in imported products, and the ongoing risk of emerging food borne pathogens has become a threat. Congress was compelled to legislate the FDA toward a new paradigm shift in the way it safeguards America’s food supply.

Since the 1990's, congress had debated the issue of food safety. In 2005, it passed sweeping legislation addressing food safety from suppliers to processors but safety during transportation was not considered a threat. Specific in the new legislation is the FDA authority to proactively focus on food safety problem prevention rather than recalls and contamination responsiveness. More specifically, FSMA directs FDA to build a new food safety system based on the public health principle of comprehensive prevention, an enhanced focus on risk-based resource allocation, and partnership across the public and private sectors to minimize hazards from farm-to-table. The intent of this enhanced FDA authority focuses on prevention.

The major changes to the import system include:

The first of the new FDA rules took effect June 30 and covered enhanced tracking and tracing of food distribution and includes significant new recordkeeping requirements. Other FDA final rules taking effect this year include hazard analysis and preventive controls (August 30) and the Foreign Food Supplier Verification Program (October 31). Taking effect in 2016 are regulations for the Sanitary Transportation of Human and Animal Food on March 31, 2016 and protection against intentional adulteration on May 31, 2016.

Temperature management is a key requirement to insure food integrity. Carriers must adopt a temperature monitoring protocol to insure a constant range of temperature required for any given refrigerated or frozen cargo in transit. This protocol must have constant monitoring and reporting capabilities. Inability of the carrier to provide such documentation could cause a particular shipment to be classified "Adulterated" and as such must be destroyed. The Pharmaceutical industry has required such detailed temperature monitoring for many of its products in transit. A 1 or 2 degree variation can affect the active ingredient in many pharma products reducing the overall effectiveness of the medicine. Similar variations in temperature for frozen or refrigerated food classified cargo can have a significant effect on bacterial growth and product shelf life. Requiring carriers to provide verifiable data on the in transit temperature of human consumption cargo speaks directly to the intent of this legislation. To oversee the transportation of the nations food supply proactively so as to avoid food related outbreaks and recalls.

Food shippers must specify in writing to carriers the sanitary requirements for transport vehicles and temperature control systems for all shipments of time or temperature control for food. Food receivers must carry out loading and unloading operations under conditions that will prevent TCS food from reaching unsafe temperatures. Shippers are responsible for establishing cleaning requirements, and they may call for cleaning procedures that are similar to those used in food processing and pharmaceutical plants. Reefer trailer design will need to be improved. Some reefer trailers are utilizing wood in the design. After next year wood has to be eliminated in the design. Designers need to utilize materials that do not absorb liquid, are durable and easy to clean and cool. Any perforations in the reefer walls need to be repaired immediately and may render the trailer unusable. All of these factors will have a profound impact on the way food products are transported. Shipper-carrier collaboration will be necessary to minimize problems and miscommunications. All of the parties in the food distribution chain need to be proactive in developing their own best practices for handling food shipments under the new regulations.