Google v.s. Amazon: The Home Delivery Business is Heating Up 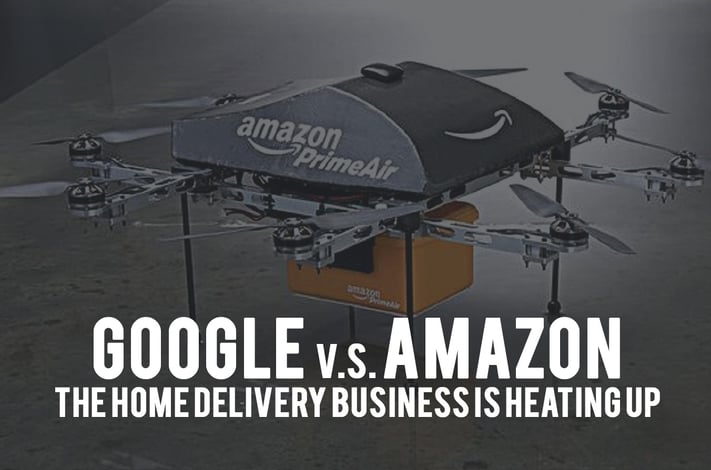 Watch your back Amazon. A new patent awarded to Google suggests that the search giant is looking into developing self-driving delivery trucks, just as Amazon readies its autonomous delivery drone fleet.

Google's parent company, Alphabet, has been developing technologies for drone deliveries. Coined "Project Wing", the initiative hopes to be delivering goods to consumers using the robot aircraft sometime in 2017. The company built its own drones and flew them in trials in Australia. Initially, it was thought that the drones would be used for disaster relief or to deliver urgently needed medical supplies to remote areas.

Advancements in drone design and safety have made more complex deliveries plausible. Google's own custom designed drones can hover and winch packages down to the ground for delivery, further mitigating any potential damage or injury from the delivering vehicle. Package security remains to be a challenge. Both Google and Amazon are experimenting with direct to consumer delivery with their "Bring it to me" application to minimize package exposure to theft and potential weather damage.

Amazon has already detailed its plans to use drones to deliver goods. The Amazon custom design dubbed the octocopter could ferry 2.3kg of goods to customers within 30 minutes of an order being placed. Amazon Prime Air is a future service that will deliver packages up to five pounds in 30 minutes or less using small drones. Maintaining an altitude below 400 feet and weighing less than 55 pounds, Prime Air vehicles will take advantage of sophisticated sense and avoid technology, as well as a high degree of automation, to safely operate beyond the line of sight to distances of 10 miles or more.

The drone would plot its navigational route based in part on information from other drones in the air, much like how commercial aircraft operate. Other drones would provide information regarding environmental conditions and potential traffic. The drone may utilize this information to plan the route from the source location to the delivery location. Both Google and Amazon expect to roll out this service in 2017.

Stay tuned for more updates! For more logistics and transportation news, click the button below.