The Impact of Unmanned Aerial Vehicles on Logistics 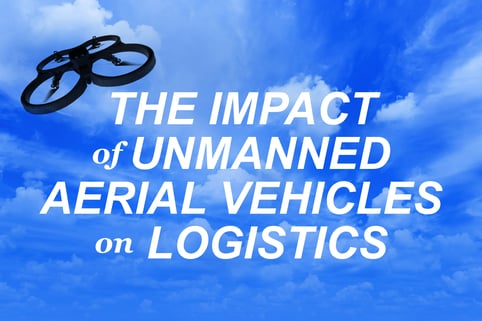 Unmanned aerial vehicles, also known as drones, are becoming extremely popular. The unmanned drone industry is expected to create more than 100,000 U.S. jobs by 2025. The economic impact could approach 100 billion within the next decade according to a study prepared for the Association for Unmanned Vehicle Systems International. Future aeronautical engineers will need to be trained in everything from computer software development to engineering, manufacturing and piloting skills. Commercial drones do have their limitations. Currently an average drone can reach speeds of 50 miles per hour and carry up to 5-7 pounds, limiting drones delivery to small parcels.

Restaurant chains are exploring the feasibility of take out orders delivered on drones. Early last year, a new startup, funded by Taco Bell, called Tacocopter, was announced. By using a smartphone app, a person can use their smartphone to order. Shortly after ordering, a quad copter drone loaded with tacos would be on its way to your location.

National pizza chains are also getting into the drone delivery business. Restaurants who deliver items would likely require heavier cargo drones given the size and weight issues. The models currently in testing are still in the prototype phase.

There are a myriad of legal, logistical, technological issues to address before the skies are filled with drones, however. The Federal Aviation Administration has proposed legislation that would put limitations on the use of drones commercially. The FAA's proposed rules would require operators to keep commercial drones within eyesight at all times severely limiting the distance a drone could travel. Such restriction would make any type of drone delivery unfeasible. Perhaps some type of airborne monitoring station with video capability could monitor drone traffic along a specified drone route, much like the traffic cams we have today. Needless to say, drone deliveries are a few years away but likely to be a reality.

An interesting model of how drones might be applicable in freight transportation is the relay station model used in the LTL Transportation Industry.  As a model for a mail and package delivery system, LTL Transportation companies utilize regional terminals as relay stations in which shipments from all over the country are consolidated and routed on different trucks travelling on a common route.

Now consider the relay station model, but with drones. Two companies called Matternet and ARIA are currently working on this concept. In their plans, a package would be flown from one relay station to another by drone. From there, the package can be transferred to other drones for final delivery or to continue on to another route destination. This model resembles how the trucking, railroad, ocean and airfreight industries group their customer freight. The technology teams at these companies believe that they are working on developing the next generation of commercial air package transportation.

At this point, non-military drones are still an immature technology. There are many ethical concerns that drone-based transportation systems will have to confront before they become anything like a viable mode of delivery.  It is difficult to imagine a 53x102 cargo container being transported overhead by an unmanned vehicle. The liability concerns alone make one pause.

Technology seems to make the unthinkable a reality today. Facebook has brought together the entire world socially. EBay has cleaned out everyone's garage. Uber has solved unfathomable transportation issues for consumers worldwide. Drone development and this new logistics technology can make one wonder: what’s next?