Robotics and Technology May Eliminate Jobs and Reduce Salaries 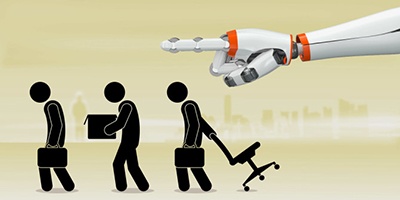 Like with most things change tends to generate more fear than optimism.  The robotics and technology trends are generating similar concerns among the unskilled worker population. Historically robotic applications have been limited to repetitive, mundane manufacturing functions; that too is likely to change.  Technology and robotics engineering is constantly evolving to expand their use in more complicated processes. A somewhat dated study from economists at MIT and Boston University published by the National Bureau of Economic Research attempts to quantify the effects of industrial automation on American employment. It found that between 1990 and 2007, each robot added to the workforce reduced employment in the local commuting area by three to six jobs.  The addition of one robot per thousand workers also lowered wages by 0.25% to 0.5%. Overall, the report estimates robots cost the US between 360,000 and 670,000 jobs total during the span in question.

Automation and robotics has been in place in the Logistics industry for years.  Most prevalently in the warehouse and distribution centers. Warehouse-based robots help increase efficiency and productivity when performing product retrieval tasks. At warehouses operated by The Gap, Staples and Zappos, for example, autonomous robots receive information about a product required for an outgoing order. The self-propelled robot navigates the warehouse, finds the product and transports it back to a human operator who processes the order. The robots continually rearrange the warehouse to place popular products around the facility's perimeter, reducing the time spent to route these products to employees. It may not be time to panic about job security just yet. The reality today is that these automated warehouses are typically highly mechanized environments that still employ people in key functions. An example would be a modern sorting center which has much higher productivity and accuracy than in previous generations. Even with all of this advanced technology, in large sorting hubs there may still be more than 1,000 employees who spend their time loading and unloading trucks, handling parcel containers, and manually sorting odd-sized items. There is also the need for supporting staff required to maintain these complicated systems. One thing is certain; the cost and time savings generated by these automation applications means the technology is here to stay.

Automation on the Road

We have discussed automation behind the wheel in several recent articles. The popularity and importance of automated semi trucks bears a quick re-visit. Automation applications for semi trucks on major highways has been in testing for years now and has proven to be at least as reliable as a professional driver.  Although automated driving technology has been successful on major interstates, one of the more significant challenges has been the local pickup navigation and final mile delivery. The local surface streets off the interstates has been a challenge to current automated navigation technologies. Starksy Robotics, a San Francisco-based startup company, is among several tackling the problem of how to autonomously drive a truck before it gets on an interstate and once it gets off. The company’s aftermarket retrofit kit remotely controls the throttle, steering and transmission, mirroring the driver’s input from back at the office who uses the data feed from the truck’s cameras and data feed to get a sense of its surroundings. The local pickup and delivery navigation can be operated remotely by a qualified CDL driver from a remote location using this technology.

In future, the general public will interface with robots on a daily basis. We won’t fear for our physical safety because these robots will become more advanced and more safe using advanced sensors such as cameras, laser scanners, and proximity sensing skin. Using cloud computing techniques, these robots will provide high-quality customer service; they will be able to speak our language, react to our emotions, and access appropriate account information to ensure successful interaction.