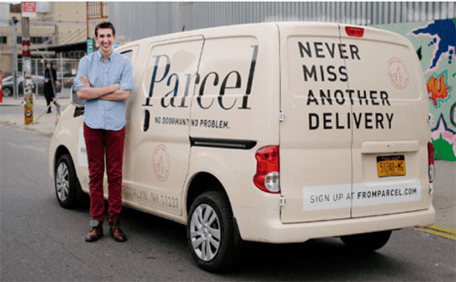 Walmart has acquired Brooklyn-based delivery startup Parcel, the retail giant’s sixth technology startup acquisition in the past 14 months.  This move is just a singular acquisition toward an aggressive common industry goal; catch up with Amazon.  It makes sense.  The best online ordering system means nothing without boots, or in this case, wheels, on the ground.

Walmart has acquired Brooklyn-based delivery startup Parcel, the retail giant’s sixth technology startup acquisition in the past 14 months.  This move is just a singular acquisition toward an aggressive common industry goal; catch up with Amazon.  It makes sense.  The best online ordering system means nothing without boots, or in this case, wheels, on the ground.   Founded in 2013, Parcel is a “last-mile” delivery platform designed to help e-commerce companies get their goods to customers’ doors. It operates around the clock, delivering packages in scheduled two-hour windows, overnight, or on the day an order is placed.  In a market as small but demanding as New York and its boroughs, this is a sharp move.  Walmart’s' other strategy, which involves utilizing staff to make these types of high demand deliveries, is simply not going to cut it.  Questionable reliability, in terms of personnel and physical assets is, in this industry watcher's opinion, an unsustainable option.  In terms of what Walmart has in store for Parcel, it plans to use Parcel’s platform for last-mile deliveries in New York City, covering general merchandise as well as fresh and frozen groceries from both Walmart and Jet.

The Jet acquisition has been one of the quietest multi-billion dollar grabs in recent history.  I had to dig reasonably deep, and on the web, that's not saying much, to find out if the deal has positioned Walmart as they expected.  For Walmart, the purchase marks a giant bet on a largely unproven startup that only launched its shopping site widely last July. Up until now, the largest U.S. e-commerce acquisition was last year’s $2.4 billion sale of Zulily, a public company, to QVC.

The Jet acquisition is an acknowledgement by Walmart CEO Doug McMillon that his company needs outside help if it is ever going to close the giant gap with Amazon. It is still unclear whether that is the right strategy for the brick-and-mortar retailer.  Jet sells more than 12 million products ranging from TVs to toys to cereal, and even milk and other fresh groceries in some markets. A little less than a third of its sales volume comes from items that Jet stores in its own warehouses and sells directly to customers.

Can Walmart really threaten the Amazon Kingdom?  It is unlikely, but, as they say, on any given Sunday.  Of course, the domination of the online Amazon Kingdom is far from a singular battle.  So, the assault against Amazon is on.  Leading that assault from the frontlines is Marc Lore, head of e-commerce for Walmart and former CEO of Jet.com, under whose leadership the retail giant has snapped up e-commerce startups across footwear and men’s fashion, including Bonobos, Moosejaw, ShoeBuy, and ModCloth.

It is no secret that Lore, who worked at Amazon after his company Quidsi was acquired by the company in 2011, did not particularly like his time there. But he feels differently about working for Walmart.

"People don’t believe me when I say this, but it feels like a startup," Lore told Fortune Magazine's executive editor Adam Lashinsky at an Advertising Week panel on Wednesday. "We’re running fast and making a lot of moves." Lore attributed that to having shared values with Walmart's president and chief executive officer.

What Commodity or Service Will Define the Next Battle Ground?

The current market is clearly defined.  Same day, next day, hassle free returns, food deliveries...what could possibly be next?  I don't know, but we're going to find out.  To keep up to date on these topics and more subscribe to our Blog @ http://www.land-link.com/blog.