5 Evolutions in the Transportation Industry: Prepare for the Changes 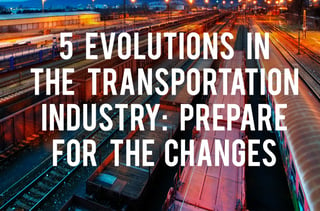 2016 will roll out several changes in transportation protocols, and every shipper needs to understand and prepare for the modifications. Current security challenges, along with an upcoming election year, mean that many additional changes are likely coming. Here at the top 5:

In a previous blog article, The Importance of Accurately Declaring Your Shipment Weight, we outlined some details of the new mandate and consequences of weight declaration inaccuracies. This is a topic deserving further exploration.

The effective date of the Container Weight Mandate Legislation is July 1, 2016. After that date, any shipping container bound for an ocean cargo vessel must have documented weight verification. The two available options for documentation are fairly straightforward:

Either method is equally acceptable and is the choice of the shipper. Be advised: containers without this documentation, presented to both carrier and terminal, will not be loaded on the vessel – no exceptions!

Drivers will soon be required to log all activity via an on-board recoding device, making it virtually impossible to skirt hours of service regulation. While the rule’s effective date and publication date in the Federal Register are still unknown, it is likely that the rule will go into effect very soon.

The development of the Electronic Logging Device mandate is part of the transportation reauthorization bill MAP-21 that was signed into law in 2012. The mandate is expected to reduce trucking capacity in the short-term because smaller operators will have a harder time skirting hours-of-service rules. In the longer term, the information they provide may allow for trucking firms to better utilize their assets, unlocking capacity and profits for carriers.

The challenge for carriers will be to utilize the massive amounts of data being generated daily by each truck in the fleet. Technology companies are working on applications to identify, categorize and utilize specific data for targeted informational goals. It is very likely the information will be retrievable through a simple app on the driver’s phone or tablet.

The ACE program has been pushed back beyond its scheduled launch date. However, it is anticipated to go into effect sometime in 2016. Given our current defense posture at our nation’s borders, its implementation is likely sooner than later.

ACE is a “single online window” which allows shippers to file the myriad of documents required by government agencies for importing and exporting goods in a single, online portal. In addition to enhanced security, ACE is expected to save shippers time and cost. There is growing concern by industry trade groups over whether U.S. Customs has enough personnel to successfully manage the ACE system noting a similar system implemented in Australia, which was an initial disaster due to preparedness issues by Australian customs. NCBFAA, which represents nearly 860 companies, has made a series of recommendations to Customs to avoid an Australia-scale fiasco. Those recommendations include guaranteeing the average time of release in ACE is equal or better than under the current system, and that government officials, both from Customs and other agencies involved in the single-window, are available for troubleshooting.

Merger and acquisition activity is rampant in the transportation industry, as large transport providers seek to secure and improve their market standing. This is impacting motor carriers, ocean carriers and 3PL's. Some of the most recently prominent acquisitions have been:

These massive consolidations are likely to translate into higher over the road transportation rates. While trucking and logistics firms have been consolidating willfully to grow their business, consolidation in the maritime industry seems to have been forced by overcapacity, causing declining rates.

The Panama Canal Authority is nearing completion of a multi-year expansion program that involves the construction of two new sets of locks, on the Pacific and Atlantic sides of the canal, to accommodate larger ships. The new Panama Canal locks, expected to open in April 2016, will roughly triple the size of ships that are able to transit the waterway from 5,000 20-foot-equivalent units to 14,000 TEUs, boosting available capacity.

The project is expected to create demand for ports to handle New Panamax ships. Several U.S. Eastern Seaboard ports will be ready for these larger ships, and others are considering renovations, including dredging, blasting, and bridge raising. The ports in Norfolk, Virginia, Baltimore and New York have channels with sufficient depth to accommodate Panamax ships. Baltimore’s Seagirt Marine Terminal dredged the additionally required 50-foot container berth in 2012. The Port Authority of New York and New Jersey, however, must complete their $1 billion project to raise the Bayonne Bridge by 65 feet before the megaships can pass underneath. Workers have completed the first elevated sections of the Bayonne Bridge's new approach ramps; a milestone that officials say lets them move ahead as planned with the complex project to remove the main span as an obstacle to economic growth. The project is expected to be complete in the summer of 2016.

Land-Link Traffic Systems is your one-stop resource for your supply chain, logistics, and transportation management needs! For more information or a free assessment, call us at 732-899-4242 or click the button below.