Be Aware of Cargo Theft Risk Over The Labor Day Weekend 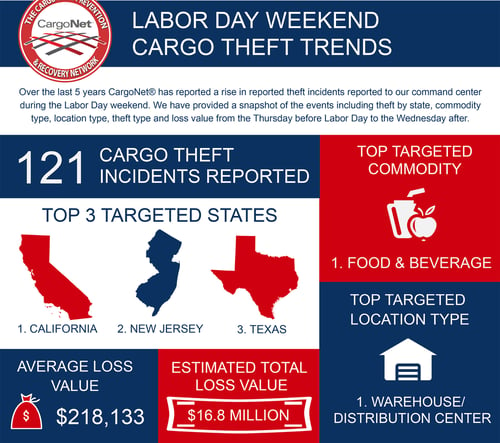 In the seven days preceding and following Labor Day 2012 to 2016 , 121 cargo thefts were recorded across the United States and Canada. Cargo theft events were highest in 2012, with 30 reported cargo thefts and gradually decreased each year to 16 reported events in 2016. In total, $16.8 million in cargo was stolen in this period, including a single $5.7 million shipment of high-end smartphones that were stolen in transit between Delaware and Washington in 2015. The average recorded event was worth $218,133. Electronics and household items were the most commonly stolen commodity in recent years, and for Labor Day Weekend 2016, electronics thefts spiked when cargo thieves stole five truckloads of high value consumer electronics like laptops, televisions, and audio equipment.

Security policies and procedures are a paramount concern for today's logistics professionals. Not only to guard against pilferage but to ensure the integrity of a client’s brand. Cargo which is stolen will eventually find its way to consumers but on the way may be contaminated or altered potentially causing harm to end users. It is incumbent on freight carriers and shippers to maintain a strict security policy to protect against these threats. Sadly, it's the world we live in today. For guidance on implementing security protocols in your organization, please contact us today.