Can The Biden Administration Fix Our Infrastructure? 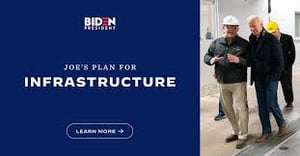 America’s roads, bridges and tunnels are crumbling at an alarming rate. Every 4 years the American Society of Civil Engineers (ASCE), an organization made up of over 150,000 civil engineers, gives the United States an “infrastructure report card". The organization gave the U.S. a grade of “D+ in its most recent evaluation. This grade is an improvement from the previous one. The effects of failing infrastructure and the need for the federal government to improve it are obvious, yet why isn’t the government doing anything? There is little disagreement in Washington that repairs are critically needed. The slow response is mostly a combination of trying to secure funding and the snail’s pace at which our federal government moves.

President Donald Trump declared at his inauguration, "We will build new roads, and highways, and bridges, and airports, and tunnels, and railways all across our wonderful nation." At least seven times, his White House has declared that the chosen theme of a week would be infrastructure, but each time the issue has become lost in other events, often generated by the President himself. The ASCE says $4.6 trillion is needed for improvements in the next decade. The Democrats said they and Trump had agreed on a $2 trillion price tag for an infrastructure plan which would only be part of a national solution that could also include state, local and private action but precious little has been achieved. Despite all this agreement the Trump administration fell woefully short of its’ infrastructure promises.

The key elements of the Biden Plan to Build a Modern, Sustainable Infrastructure and an Equitable Clean Energy Future include:

Biden will create millions of good, union jobs building and upgrading a cleaner, safer, stronger infrastructure – including smart roads, water systems, municipal transit networks, schools, airports, rail, ferries, ports, and universal broadband access – for all Americans, whether they live in rural or urban areas. Common to all these initiatives is protection of workers. A minimum wage of $15/hour, provide paid leave, maintain fair overtime and scheduling practices, and guarantee a choice to join a union and bargain collectively. Additionally, he will support tough enforcement to end the misclassification of workers as independent contractors which could cost companies like Fed Ex, Uber and other crowd sourcing companies who classify most of their workers as independent contractors.

Impact On Logistics And Trucking

The transportation industry is faced with several challenges on a daily basis, from traffic congestion to road conditions and customer demands. Covid-19 has exacerbated these challenges. The legislative shackles which impede the operations of trucking companies nationwide have created additional operational challenges for carriers to meet delivery expectations. It’s reasonable to expect a safe infrastructure within which to operate interstate commerce. Particularly considering the amount of road usage tax each truck pays annually. It may be worthwhile to pause and consider just how utterly dependent our country is on trucking.

Hopefully, as we emerge from the Covid virus, the Biden Infrastructure plan will begin construction in 2021. Biden’s Build Back Better economic recovery plan, which includes infrastructure, would spend over $7 trillion. And create an estimated 10 million jobs. Getting congress to fully fund the plan may be challenging.

To stay up to date on these and other Logistics technology topics subscribe to our blog @ http://www.Land-Link.com/blog.