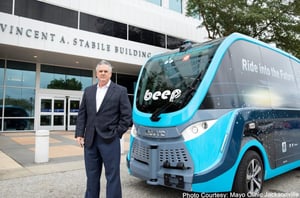 In the months since the corona virus prompted shelter-in-place orders around the world, entire companies, industries, and economies have been decimated. One market that appeared poised to escape the impact was autonomous vehicles, particularly in the case of companies whose cars can be used to transport supplies to health care workers. But it seems even they are not immune. While limited continued testing of autonomous vehicles will still be possible via virtual simulation tools, AV technology, within the context of the corona virus pandemic, may still present the possibility of addressing critical needs and providing essential services through the use of driver-less delivery vehicles.   The combination of the need to minimize health risks presented to and by human drivers who deliver vital supplies and materials to the public, and the ability of AVs, equipped with disinfection tools, to deliver such items, may incentivize public authorities to authorize expanded testing and use of AV throughout the U.S.

The trade off we need to consider is mitigating the spread of the virus by driver/recipient interaction and the inherent public safety concerns relative to autonomous vehicles. We are currently at a potentially catastrophic stage of the Corona pandemic in most of the United States. PPE and personal distancing efforts seem to be our primary line of defense. Even with those efforts we are, by all medical accounts, loosing ground to the virus. The main threat of AV Technology to public safety is the chance of technological failure resulting in injury and property loss. At the present time, food and medical deliveries to customers, especially critical to potentially susceptible people, such as high-risk older adults or those with pre-existing or immunosuppressed conditions, are being conducted by human drivers who are, in turn, exposing themselves to potential risk. We have to decide which risk presents the lowest downside.

The technical ability to address such critical needs via AV testing may be of compelling interest to public authorities, especially with reduced traffic flows from slow re-openings and potential reversals of openings, which would mitigate safety concerns over the expanded presence of AV on public roads.  There may be no better time than now to implement Autonomous Vehicles service, at least on a limited basis.

According to press reports, the concept has been already tested in China, where a self-driving delivery company called Neolix deployed fleets of self-driving vans to transport medical supplies and food to areas of the country hit hardest by COVID-19, including the epidemic’s epicenter in Wuhan.   The self-driving vans were also reported to have the capacity to disinfect city streets, highlighting an added potential beneficial application of AV technology.

Despite the Herculean efforts of the autonomous vehicle companies grounded by Covid 19, it seems likely that a few will emerge from the pandemic worse for wear. Simulation, while a good exercise, is no substitute for testing on real roads.

A longstanding challenge in simulations involving real data is that every scene must respond to a self-driving car’s movements, even those that might not have been recorded by the original sensor and have no programmed response. Whatever angle or viewpoint isn’t captured by a photo or video has to be rendered or simulated using predictive models, which is why simulation has historically relied on computer-generated graphics and physics-based rendering that somewhat crudely represents the world.  This technology works best on repetitive routes such as a trash truck or a city bus. But the data must be collected along the actual route to allow for accurate programming and Artificial Intelligence to augment the route learning and reaction to deviations.

As the virus marches on through this fall and winter as many are predicting, serious consideration must be given to adopting this technology for both personal and commercial transportation. Although the thought of a runaway semi trick at 80,000 pounds barreling down the interstate is a scary thought, it may be an acceptable risk considering what our country is experiencing in this pandemic.