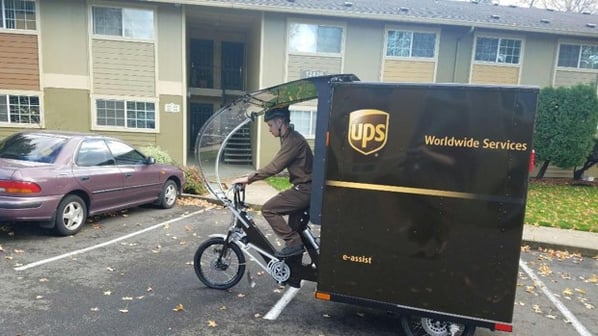 The boom in online stores is increasing the demand for parcel delivery services, particularly in the big cities. New York, Chicago and Los Angeles are experiencing serious traffic issues due to the amount of parcel delivery vans clogging the city streets. Add to this the number of ride share drivers in any metropolitan area daily and it is easy to see how things are getting congested.

Consumers today are spending less time in local stores and more time online, buying not only retail items but also groceries from Peapod, office supplies from Postmates and whatever they need from Amazon. According to the National Capital Region Transportation Planning Board, it’s estimated that, on average, every person in the U.S. generates demand for roughly 60 tons of freight each year. In 2010, the United States Post Service overtook both FedEx and UPS as the largest parcel-delivery service in the country and delivered 3.1 billion packages nationwide. Last year, the USPS delivered more than 5.1 billion packages. The growth in e-commerce is fueling a rise in the number of delivery vehicles box trucks, smaller vans and cars alike on city streets.

While truck traffic currently represents about 7% of urban traffic in American cities, it bears a disproportionate congestion cost of $28 billion, or about 17 percent of the total U.S. congestion costs in wasted hours and gas. Cities, struggling to keep up with the deluge of delivery drivers, are seeing their curb space and streets overtaken by delivery vehicles, to say nothing of the bonus pollution and road wear produced thanks to a deluge of Amazon Prime orders.

The problem, really, is that we now live in a world where the brick-and-mortar stores are only one part of the retail equation and, as many a “retail apocalypse” story is warning, they are a shrinking part. Demand is being driven by people in their individual homes and apartments ordering smaller amounts of goods with higher frequency: groceries one day, several items from Amazon the next. As more goods are ordered, more delivery trucks are dispatched on narrow city streets. Often, the box trucks will double-park in a two-lane street if there’s no loading zone to pull into, snarling traffic behind them.

Many American cities are also playing catch-up as they try to understand these new urban delivery challenges and systems. That’s due in part to the failures of urban planning and the nature of the trucking business. While matters of public policy like public transit, bike lanes and walkability fall within the purview of planning boards and municipal departments of transportation, freight has always been a purely private-sector enterprise. Cities don’t have reliable data on the number of delivery trucks coursing through their streets; let alone planning for them.

If enhanced enforcement isn’t the answer, diverting delivery traffic might be. Seattle is taking an inventory of all the remaining alley space in the city. Instead of letting developers extend housing lots into the alleys, they might be used to accommodate some of the incoming delivery traffic.

Delivery companies are also experimenting with ways to reduce their impact. Late last year, UPS introduced its first “eBike” deliveries in Portland, Oregon. The goal is twofold: Reduce carbon emissions while putting a delivery vehicle on the road small enough to take advantage of curb space. UPS is also integrating across its U.S. routes its new big-data tool, On-Road Integrated Optimization Navigation (ORION). As a UPS driver travels their route, ORION works in the background considering up to 200,000 possible routes before picking the most optimal route for a driver to take to reduce the overall time spent driving around from delivery to delivery. The next generation is going to be a real-time tool taking traffic into account.

UPS currently uses drones to help drivers in rural delivery locations. It’s unclear how practical drone delivery can be in a metropolitan area considering the risk of personal injury, theft and inaccurate consignee deliveries. The solution to the congestion problem will likely come from many angles over the coming years. We simply were not prepared for the online purchasing boom and have never caught up.

To stay informed on this topic and others, subscribe to our blog.