The Future of Transportation

Before it was referred to as "Logistics", it was simply trucking. Rail, air and specialty transportation was a rarity. It was operationally simple and customers expectations were basic in terms of service. The world got itself in a great big hurry over the last 30 years. I suppose it was all started by the auto manufacturers when they introduced the "Just in Time" inventory system in the 90's. Manufacturers saved on inventory costs by using trucks as rolling warehouses. Thus was born the concept of time critical transportation. The idea eventually caught on with other manufacturing segments and it seems today everyone is in a rush for everything. Let's take a look at what we can expect the logistics business to look like in the next decade.

Data engineering will be at the forefront of everything that goes on in supply chains. Data engineering, according to Dr. Michael Watson of Northwestern University, is "the art and science of blending data from multiple sources, automatically cleaning and filtering the data, and transforming the data to be useful for analysis." You may have heard the term "Big Data", referring to the volumes of pertinent data accumulated from various sources along the supply chain. This "Big Data" will be the source of information in the data engineering process. Another term you've likely heard is IoT or The Internet of Things. The IoT is the network of physical devices, vehicles, home appliances and other items embedded with advanced electronics capable of exchanging data with a central computer over the internet.

"Big Data" and logistics are made for each other. Companies are often sitting on masses of under-utilized data that could aid them in a number of ways.

Some of the current applications of Data Science by data-driven businesses within the industry include:

The Truck of the Future 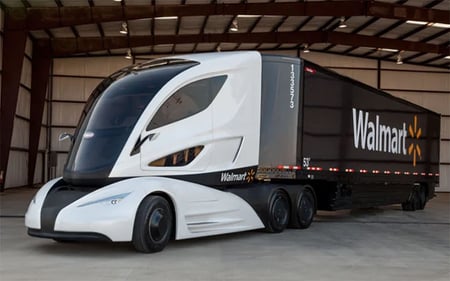 Walmart has an idea for the truck of the future. At least, that may be the case for Walmart's massive fleet of 6,500 tractors that help supply its stores. It's called the Walmart Advanced Vehicle Experience (WAVE) and it's said to be 20 percent more aerodynamic than the company's current fleet. Walmart CEO Doug McMillion says it has a "micro-turbine hybrid power train that can run on diesel, natural gas, biodiesel and probably other fuels still to be developed." There's also a battery pack on board with limited electric range.

Other technologies that are sure to save money and time are self-repairing concepts, zero emission and electric power trains, and more aerodynamic and unorthodox exterior designs that will make these vehicles faster and safer. In all, the future looks bright for the commercial trucking industry, so long as these vehicles make it to market.

There are hurdles for these companies, though. The semis of the future focus on safety advancements as well as technological advancements—both for their own trucks and for the cars and vehicles around them. The plan is to make the world a safer environment, and commercial trucking is leading the charge. These trucks not only look spectacular but many of them look straight out of a sci-fi movie while having practical applications that might just make you raise your eyebrows.

McKinsey & Company, a consulting firm, projects that one-third of new trucks could be highly autonomous by 2025 and even more advanced versions of limited automation seem much closer. Some companies envision a hybrid system for large trucks and cargo hauling, with human operators needed to drive the trucks onto major highways, where self-driving software would take over. Humans would still keep watch over operations, but they might also catch up on paperwork while the truck steers, accelerates, and brakes itself. Human drivers would need to exit highways, drive on side streets, and perform other duties, such as ensuring that freight gets properly loaded. The American Trucking Associations envisions future drivers as more like airline pilots, who often turn their planes over to computers at cruising altitude.

To keep current on the future of Logistics, subscribe to our blog by visiting www.Land-Link.com/blog. We will continue to monitor this topic closely.