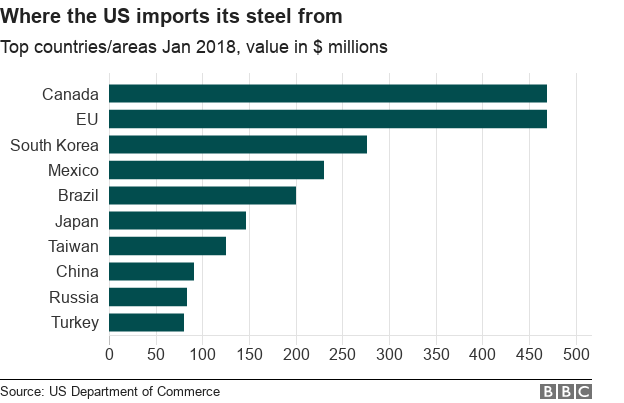 President Trump’s planned trade tariffs effect mainly imported steel and aluminum. Let's take a moment to explore the details of the tariffs and what consequences we can expect.

Specifically, the tariffs apply to steel manufactured in any other country and shipped to the United States will be subject to a 25 percent tax. Imported aluminum will be hit with a 10 percent tax at the U.S. border. These are hefty fees because Trump’s goal is to incentivize U.S. companies to buy steel and aluminum from U.S. producers, so the domestic metal industry gets stronger. He argues the future military demand alone justifies the creation of larger steel and aluminum manufacturers to supply raw materials for the F-18 and F-35 fighter jets and armored military vehicles. This strategy is keeping with the America Firsts and Make America Great Again campaign slogans that carry huge support with many voters. Politically, this should make Trump even more popular with some members of his blue-collar base. Many of the jobs that might come back in steel and aluminum factories would be union jobs that pay well more than $20 an hour. His mainstream base is just eating it up. But, mainstream Republicans, especially the Wall Street and business crowd, are not happy. Many Republican lawmakers urged Trump to do only a small tariff targeting China. Trump dismissed these concerns and announced a tariff on steel and aluminum imports from everywhere in the world, even allies such as Canada. This is a bold move as it has consequences on both sides of the ball. Let’s explore what those consequences or payoffs might be.

The Cost of Anything Manufactured with Steel or Aluminum Will Rise

Everyone knows; costs run downhill. The tariff costs will have to be recouped by the manufacturers in the price. Everything around you likely have some steel or aluminum in its manufacture. The whole goal of Trump’s tariff is to get prices of these metals to rise domestically so it’s profitable enough for U.S. producers to make more steel and aluminum and employ more people, but it will come at the cost of domestic retail price increases.

There's a big debate about how hefty the price jumps are going to be. Century Aluminum CEO Michael Bless, who has pushed vigorously for the tariffs, argues that the price of a typical $35,000 passenger car would rise by just $35. That figure has been met with skepticism by the auto industry saying it will be much higher. Supplier relationships will be drastically altered and as always, seems to be the case parts from supplier A are always just fractionally different than parts from supplier B which leads to all sorts of manufacturing process adjustments. Change, as drastic as this, always comes at a price.

China, Russia and Even Our Friends to the North are Bound to Push Back

The traditional response by other counties in this case is to make a formal complaint at the World Trade Organization, but that can take years to get a ruling. China, Canada and others could decide to retaliate right away by putting tariffs on some U.S. goods coming into their countries. The most likely target is U.S. agriculture products and airplanes. These are top U.S. exports to other countries and would likely hurt Trump’s base in the Midwest. China is already discussing retaliatory measures. In short, a global trade war could easily unfold.

Whatever your politics, no one can argue the tenacity of the domestic economy since Trump took office. A trade war could dramatically affect the current stability of the domestic manufacturing indicators and have long lasting and far reaching ripple effects. These tariffs may indeed create demand for domestically produced steel and aluminum resurrecting those industries, but the basic rule of supply and demand will eventually stabilize prices to meet the demand. So, while we are creating domestic jobs, these initiatives may have little affect on the affordability of these manufactured goods for the average consumer.  Inevitably the consumer always absorbs the cost. If we can bring back the domestic manufacturing base of the mid 20th century I'm all for it.

President Trump wants to bring manufacturing jobs back home. Some trade experts believe this is going to be a difficult task. Many of the outsourced jobs overseas are low skilled positions. The demand now from manufacturing firms are for higher skilled positions. Clearly, we're not going back to the way things used to be done on the assembly line. Robotics, laser engineering and RFID (Radio Frequency Identification) applications are now the norm and have been for some time. Manufacturing job seekers should be concentrating on these technologies if they want to be successful in the coming years.

And, of course, if you build it you must ship it. These advanced technologies apply equally to the supply chain challenges from raw materials to delivery of the finished goods. At Land Link Traffic Systems, we are skilled in the latest technologies to maximize your supply chain management protocols.

Contact us today for a no risk review of your supply chain protocols today. Visit us @ www.Land-Link.com for details.