Washington May Be Easing Trucking Regulations 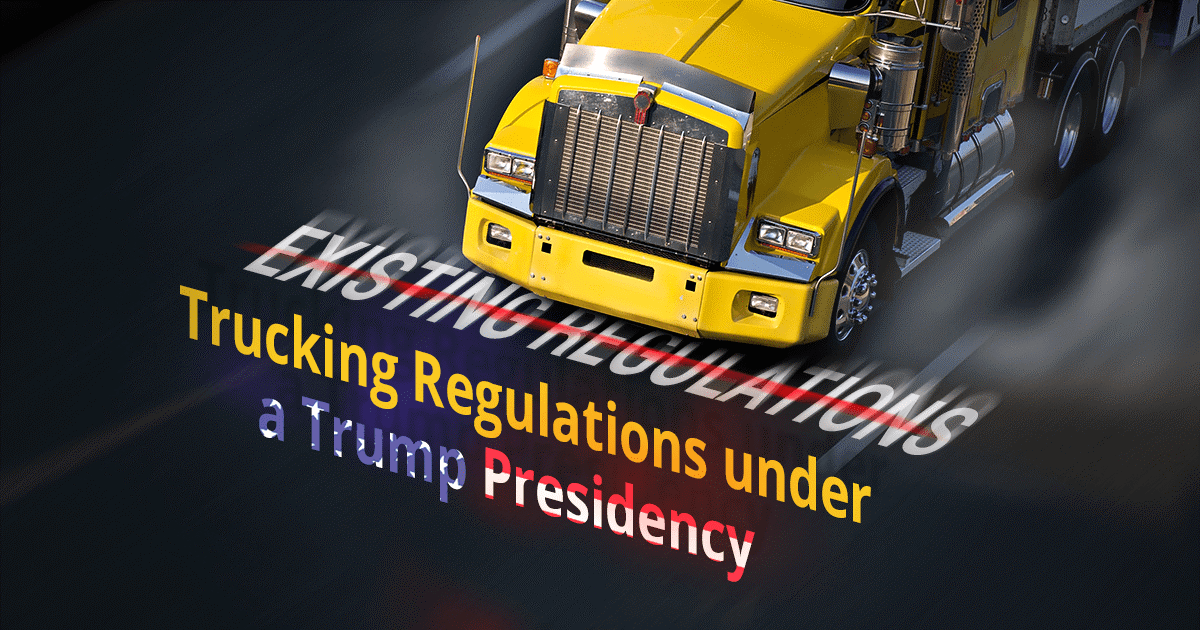 Most industry practitioners believe trucking is a totally deregulated industry. It’s true that, economically, it has been deregulated in interstate commerce since the Motor Carrier Act of 1980, but safety regulations have made it one of the most tightly regulated sectors in interstate commerce. Environmental pollution, driver standards, HOS and electronic logging rules instituted by the FMCSA have been a major cost of doing business in the trucking industry. Following the pro-regulation Obama White House, Trump may be the advocate the trucking industry has been pining for. There has been no significant easing of current regulations but the good news is there is like to be no more additional legislation affecting the industry for the remainder of Trump's term. In this issue, we'll take a look at a few of the major regulations and update you on what's going on.

The three most invasive regulatory hurdles currently facing trucking are the enforcement of electronic logging devices (ELDs), the further tweaking of driver hours of service (HOS), and the move to allow a pilot program of only 200 drivers under the age of 21 into interstate commerce; an age-group that has been locked out of driving the big rigs since the Motor Carrier Act of 1935.
So far this year, the biggest issue for shippers has been the lost productivity due to the full enforcement of the ELD rule. This rule is designed to eliminate cheating on driver HOS through the elimination of paper log books in favor of electronic devices that are difficult to evade. after several delays in implementation and enforcement regulatory enforcement personnel have begun issuing stiff penalties for noncompliance. Industry analysts predict this regulation alone has caused a 3% to 8% drop in carrier productivity. Longtime advocates of ELDs say that the devices ultimately make carriers and their drivers more efficient through better planning of routes to take cost out of the system. Carriers say LEDs can help nudge shippers to work more closely with their carriers on times and locations of pickups. Even little things as reducing congestion at the loading dock can pay big dividends for both shippers and carriers in eliminating inefficiencies. The efficiency gains and improvement in public safety not withstanding, these deficits must be accounted for in the form of rate increases.

Going forward shippers should try and emulate four best practices in order to mitigate the effect ELDs are having on their valuable capacity and rates:
Make sure your business is not overly complicated from a carrier’s perspective;
Eliminate unnecessary stops as well as freight that require multiple moves;
Reduce or eliminate detention times, which ultimately reduces driver pay;
and create favorable lanes and market niches to make your relationships mutually beneficial.

Ultimately, if these goals are realized, shippers can obtain all of the capacity that they need from a variety of carriers vying for their business. Otherwise, carriers say, their choices will lessen and rates increases will skyrocket.

While compliance with the ELD rule has reached nearly 99% across the trucking industry, truckers continue to complain about HOS regulations, especially the impact they have on agriculture, seasonal deliveries, logging and other sectors of trucking.

Washington is considering revisions in four specific areas:
expanding the current 100 air-mile “short-haul” exemption from 12 hours on-duty to 14 hours on-duty in order to be consistent with the rules for long-haul truck drivers;
extending the current 14-hour, on-duty limitation by up to two hours when a truck driver encounters adverse driving conditions;
revising the current mandatory 30-minute break for truck drivers after eight hours of continuous driving; and
reinstating the option for splitting up the required 10-hour off-duty rest break for drivers operating trucks that are equipped with a sleeper-berth compartment—the so-called “split sleeper” rule.

We'll keep you informed on what revisions, if any, are implemented.

For years trucking companies have advocated under 21 truck drivers. Insurance companies made the idea nearly impossible to implement even if Washington lightened up on this restriction. But on July 3rd this year the DOT announced a pilot program to allow a test group of 18-year-old drivers to operate 80,000-pound rigs. Based upon statistics there really isn’t any question that younger drivers are more likely to crash and be involved in serious incidents. And considering a fully loaded tractor-trailer can weigh 40 tons, carriers and safety advocates alike agree that this is no place for on-the-job training. Most carrier management and insurance companies are not proponents of the idea. These potential revisions alone will not solve the driver shortage however, carriers say it’s an example of Washington listening to the industry with an open mind, which itself is a change in the regulatory environment. To stay current on these and other industry topics subscribe to our blog www.Land-Link.com.